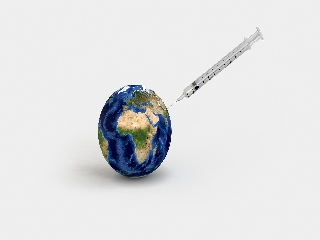 You have received more updates from us this year because of the extraordinary events and whilst our last update was issued just twelve weeks’ ago, we have prepared our usual November newsletter. In this short period since the last update we have seen the pandemic continue to evolve and our country enter a second lockdown, the race for the White House has been settled, Brexit trade negotiations have re-emerged and we experienced a market bounce as result of the positive vaccine news.

September and October were unsettled months for just about all global markets against a backdrop of a second wave of Covid cases and a contentious US election. Markets seemed poised to react and this came in the final few days of October with the announcement of tighter controls across Europe to combat the rising cases in the virus. The index for the largest 100 UK companies fell to its lowest level since April of 5525.52 points (a fall of 5.7% from the week earlier); similarly the largest 500 companies in the US market declined by 5.2% over a matter of days.

These were therefore significant corrections but much less than the falls seen in March as the expectation was that the impact of this lockdown would be less severe than earlier in the year and overall, the news was taken relatively well. This was helped by the extension of the UK furlough scheme (with 9% of the UK workforce remaining on furlough) and further support for businesses and the self employed.

On to November and the US presidential vote was slow in coming to an end with days of controversial vote handling news but on 7th November came the announcement that Joe Biden had been successful in his bid to be the next US president. Markets were generally positive with the optimism that Biden will bring greater fiscal stimulus and lead to a calmer White House, but markets were hesitant as they waited for Trump’s denial in losing his presidency to play out.

The inauguration is not due to take place until 20th January. All eyes are now on the Senate, with both the Georgia seats not offering a majority, these will be re-run on 5th January. 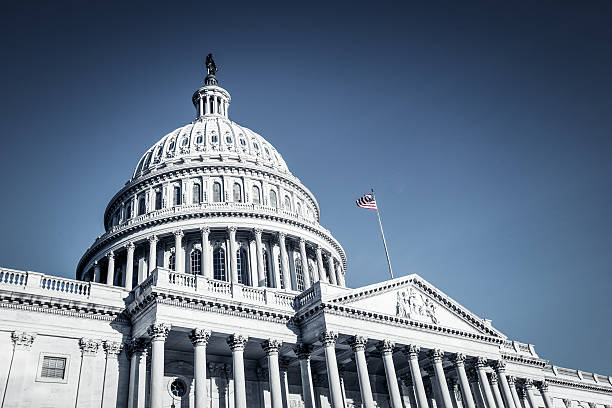 If either of these become Republican, then they would get a majority in the Senate and have a means to block Biden’s agenda. This could have an important impact on markets; further fiscal stimulus seems inevitable with either outcome but a Republican Senate would result in this being much more limited than a Democratic spending spree. A scaled down package would mean a slower economic recovery benefitting sectors positioned to perform better in slow growth (such as the tech companies) whereas a more vigorous recovery will be helpful for cyclical sectors (which represents most of the FTSE 100).

Our last update provided more commentary on how the performance differential from these different sectors has played out so far this year as investors have continued to back the winners, namely the big US tech related companies. This has been helped by low bond yields and low interest rates and in October technology companies had grown to represent 35% of the US S&P 500 index. In comparison the UK market had just 1% in technology within the FTSE 100 at the same time and this has been a big contributor to the underperformance of the UK market this year.

A couple of days after the election announcement, on the 9th November, came the news that Pfizer and Biotech have successfully trialled a Covid vaccine with a 90% effective rate. In the days that followed we also saw Oxford and Moderna make similar announcements. This is clearly positive news but it is still early days and there are some uncertainties surrounding the effectiveness on the elderly and how long the immunity lasts for. Once approval from the regulator is obtained the next step will be rolling out mass immunisations, focusing on the most vulnerable and NHS staff first.

By the summer of 2021, scientists are hopeful that we can start to reap the benefits and by next winter there is some optimism that life could return to normal. 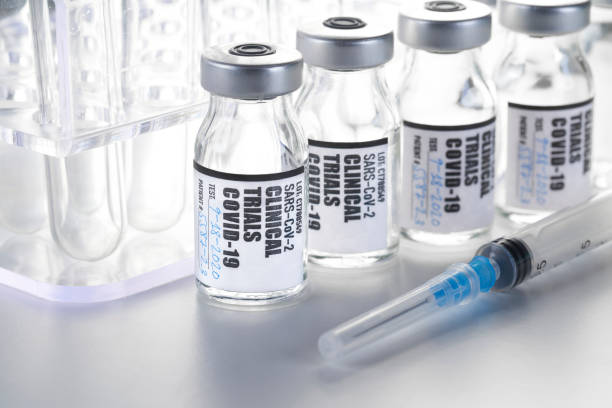 On this positive news markets reacted on a bigger scale and this was most notable in the UK market as investors turned to ‘old economy’ cyclical stocks contained within the FTSE 100 which they believe to be good value given the confidence these vaccines bring.  To illustrate this point I have shown two charts below which compare two of the best known UK names in the FTSE 100 (Lloyds and Shell in red and purple) firstly over three years and then just since 9 November compared to a tracker of the US market (shown in green). 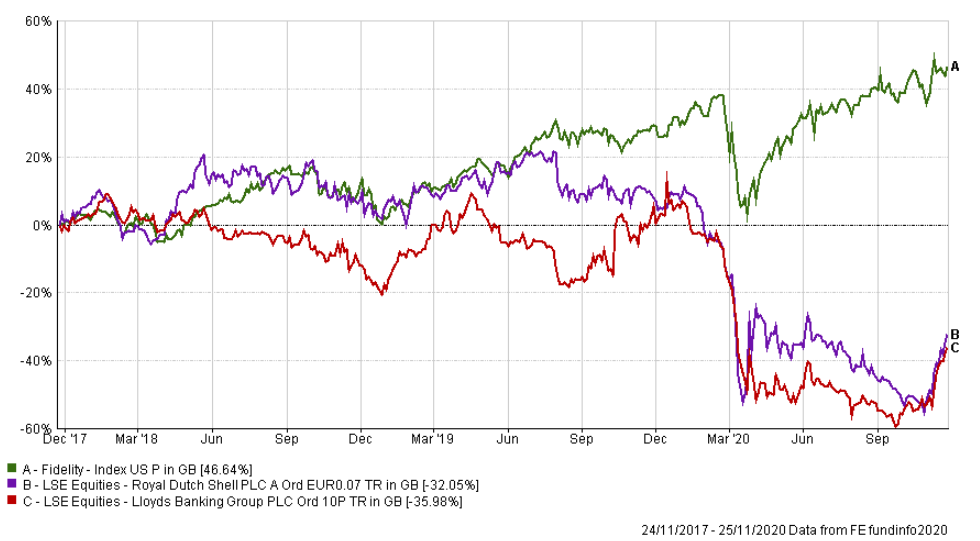 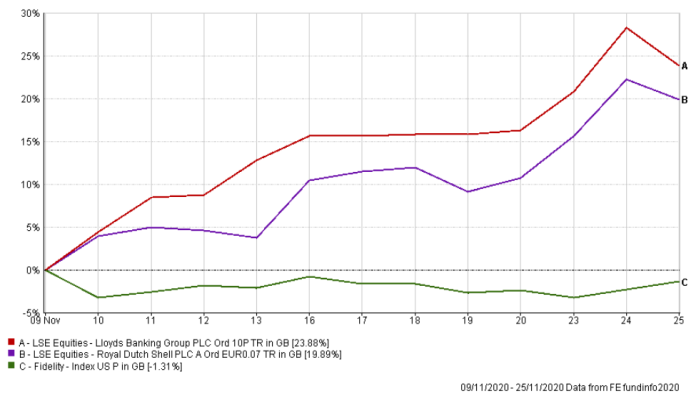 If the scale is not clear, the US market has fallen by 1% but the two companies listed have risen by an average of 21.9%.  This is obviously a very short period of time over which to compare, but it does serve to highlight the scale of the potential recovery if and when confidence returns.

Amongst all this there have been further discussions with the European Council on the Brexit trade deals and these are now intensifying as both sides seek to secure a deal before the end of the year. A deal, by however narrow a margin would be welcomed by UK markets.

With record low interest rates it’s been fortunate that inflation has also been low through this period but it is a topical discussion as to whether it is on its way back. There are several drivers that could indicate the inflationary direction is positive but we will mention the two most relevant here. Firstly the excess liquidity from printing so much money historically leads to inflation and secondly that higher inflation will assist in reducing the government debt that is being racked up. Unprecedented spending this year has taken the UK borrowing figure to £394bn and this is expected to continue to rise further as the economy recovers. We could therefore conclude that our government is comfortable in allowing inflation to run at higher level than the 2% annual target for prolonged period of time to erode the national debt. Of course this is just one theory and no one has a crystal ball but, for investors, it is important to remember that inflation impacts different asset classes in different ways and this is a key focus for us when reviewing client portfolios as the situation unfolds.

As we write this update the government has just released plans to return to tiered restrictions (by region) when we exit the national lockdown next week. This continues to be a challenging environment and daily deaths from this virus are saddening; we hope that you and your family are keeping safe in these testing times.

We believe it remains unsuitable to hold face to face meetings at this time although we continue to monitor this matter closely. Our office phone line does however remain open and we can be reached in the normal way; your adviser can also offer telephone appointments and virtual meetings so please do get in touch if you need to.