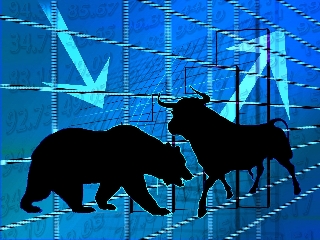 Normally, we only issue newsletters on a half yearly basis with the next one falling due in November.  However in light of the extraordinary events arising from the pandemic we thought clients would appreciate an earlier update.

Since our last newsletter in May, stockmarkets have seen a continuation of the wide performance differentials between the winners and losers from the coronavirus outbreak.  Technology has been a major beneficiary of societal changes, with more people continuing to work and shop from home.  This has led to a large difference between the technology driven US market and the UK market which has oil companies and banks making up its largest holdings.  This trend can be seen in the chart below which shows funds tracking the US S&P 500 (in red) and the UK FTSE 100 (in blue) over the last three years.  Despite this being a relatively short time period for investments, there is more than a 50% performance differential between these two leading indices: 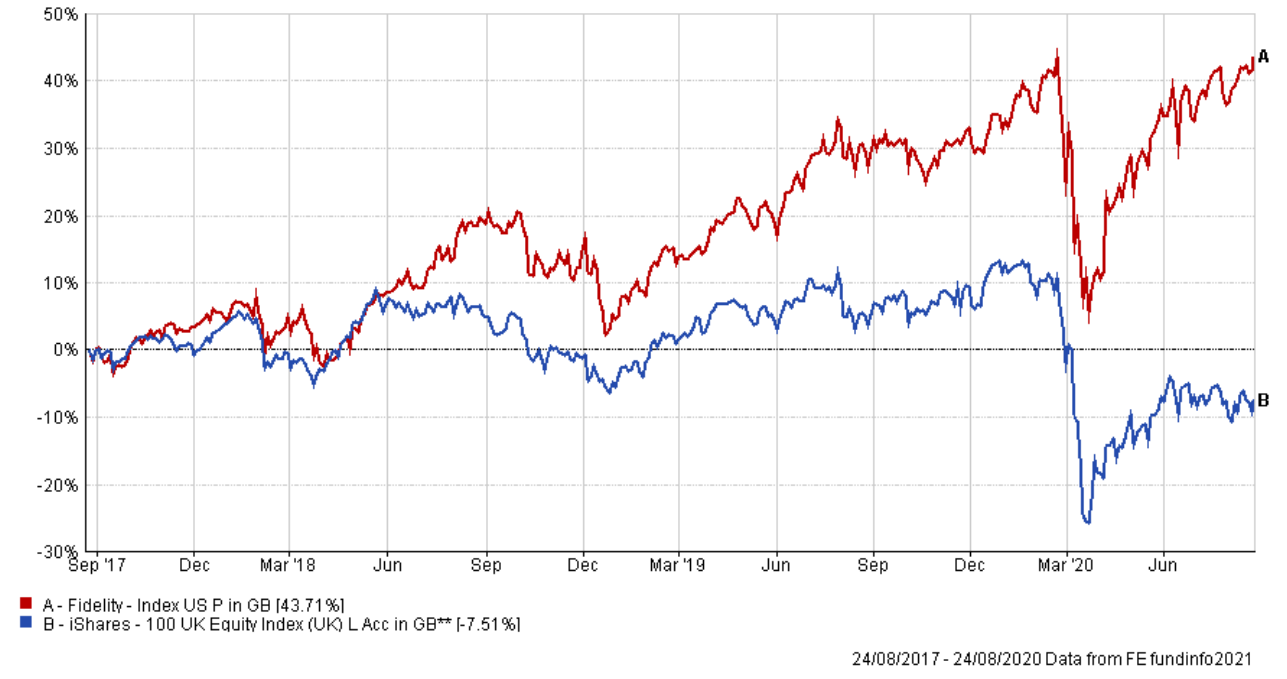 To be clear, this is not just a reflection of the differing outlook between the US and the UK (though that is undoubtedly a factor), but also a reflection of the discrepancies between the differing sectors.  This can be illustrated by comparing the Dow Jones index and the S&P 500.  The former is a well-known measure which measures just 30 American companies on an equally weighted basis, including Goldman Sachs, Nike, Caterpillar, Boeing and Coca-Cola.  Whilst it does also include Microsoft and Apple it does not include Amazon, Facebook, Alphabet or Netflix.  These latter companies are amongst the largest constituents of the American S&P 500 and are some of the best performing organisations this year.

The impact of their differing compositions can be seen from the charts below.  The first chart measures the first two of the last three years (i.e. August 2017 to August 2019), and it can be seen that the indices tracked each other relatively closely.  However the second chart shows the last twelve months, and illustrates the gap that has arisen between them. 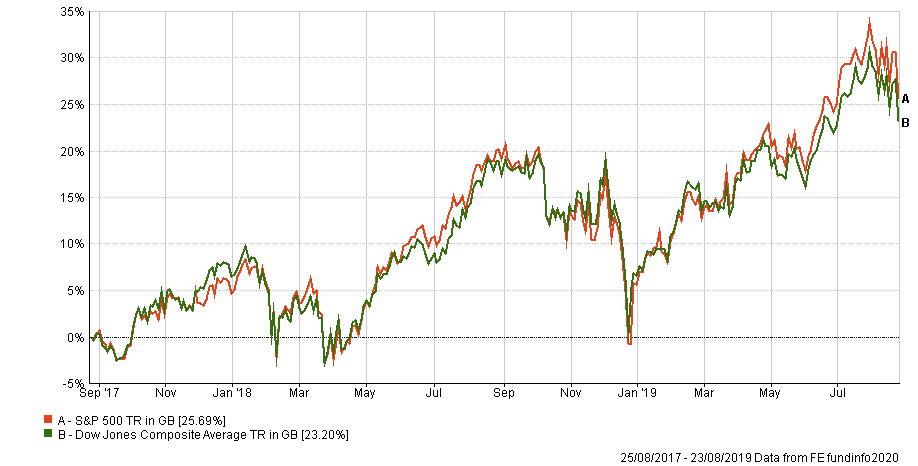 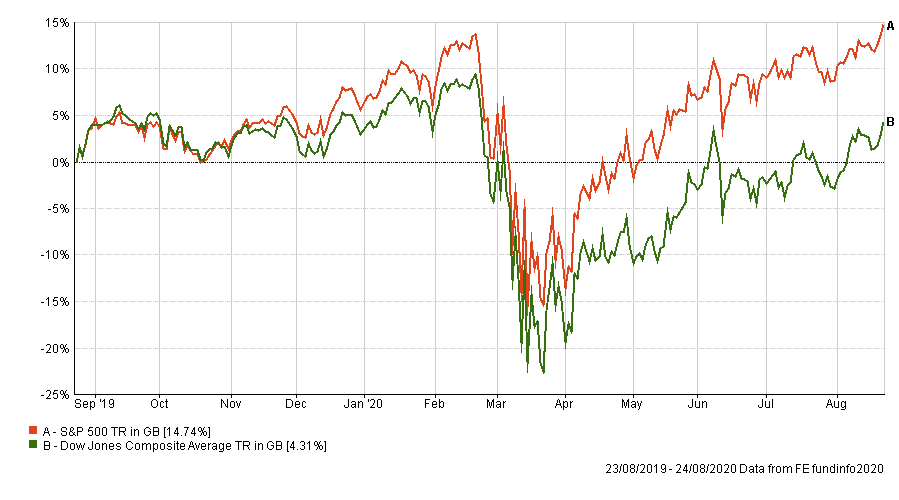 The strong gains of the S&P 500 have seen it reach an all-time high last month, which may seem something of a paradox during a pandemic.  However, investors in these stocks put forward a number of arguments to support current prices, including: 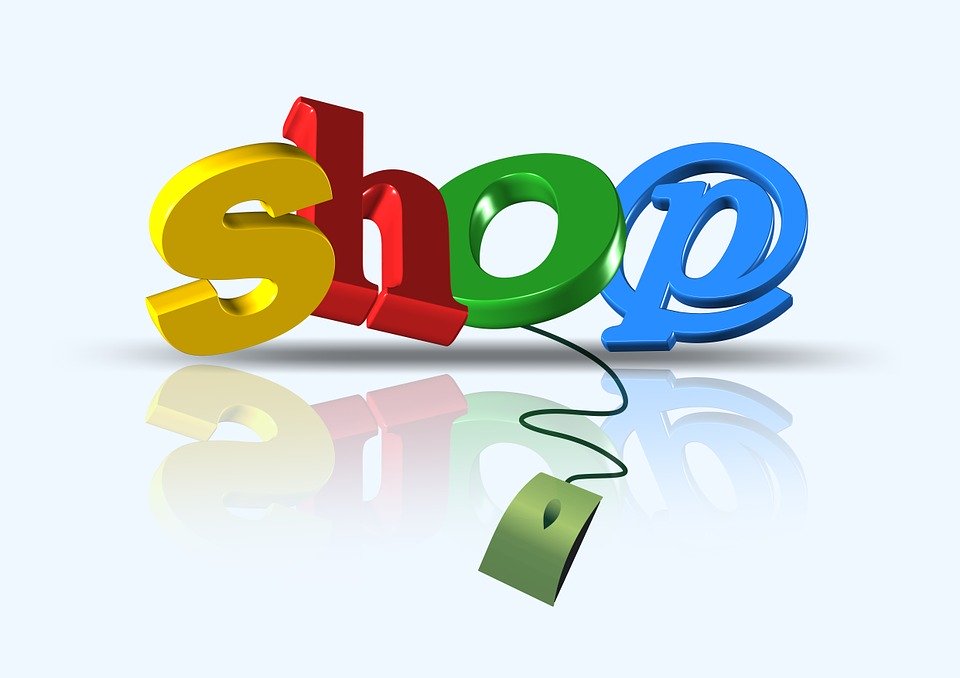 The impact of the coronavirus on different companies was neatly illustrated in a couple of statistics recently published by Royal London:

There is no doubt that the cessation of the furlough scheme in the UK is likely to lead to a significant rise in unemployment, but it is hoped this will be a short term increase that will reduce in the second half of 2021.  Covid is expected to be with us for some time yet, with vaccines unlikely to be widely available for another 12 months.  However, markets are forward looking and are projecting the impact of a return to ‘normality’ in due course.

Away from equity markets, bonds continue to look poor value, but yields are still attractive in some cases compared to cash returns.  This is particularly true in the case of lower quality debt, though care is of course needed to avoid exposure to organisations which may be unable to meet their obligations.  This is where active fund managers can add value in their stock selection.

All commercial property funds investing directly into ‘bricks and mortar’ continue to be suspended, as valuers are still declaring that there is “material uncertainty” over the prices they are publishing.  Whilst the proportion of properties bearing this caveat is reducing, the suspension has caused the FCA (the industry regulator) to consider the suitability of allowing instant trading in what is an inherently illiquid asset class. 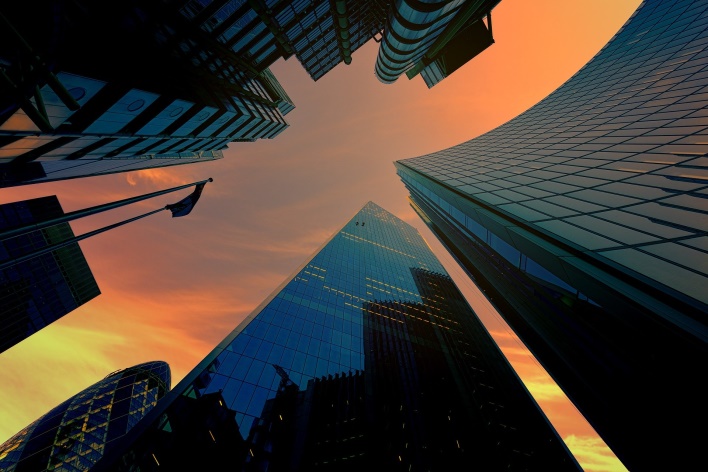 In early August the FCA published a consultation paper floating the idea that investors should be forced to give 180 days’ notice to redeem their holdings.  Although this may initially appear a disadvantage, this could be beneficial to prevent other investors causing unnecessary trading by the fund managers.

We are watching the situation closely as there could be an initial wave of redemptions when the funds to re-open.  This could cause several potential problems:

In the meantime there is no action that can be taken because the funds remain closed to trading.

Events in 2020 have of course been dominated by the coronavirus outbreak, and this will no doubt continue to be a dominate influence in the months ahead.  However it is now only a few weeks until the US Presidential election, which is scheduled to take place on 3 November 2020.  With two very different economic strategies being proposed by the two candidates, the outcome will have a significant impact both on US and global economies. 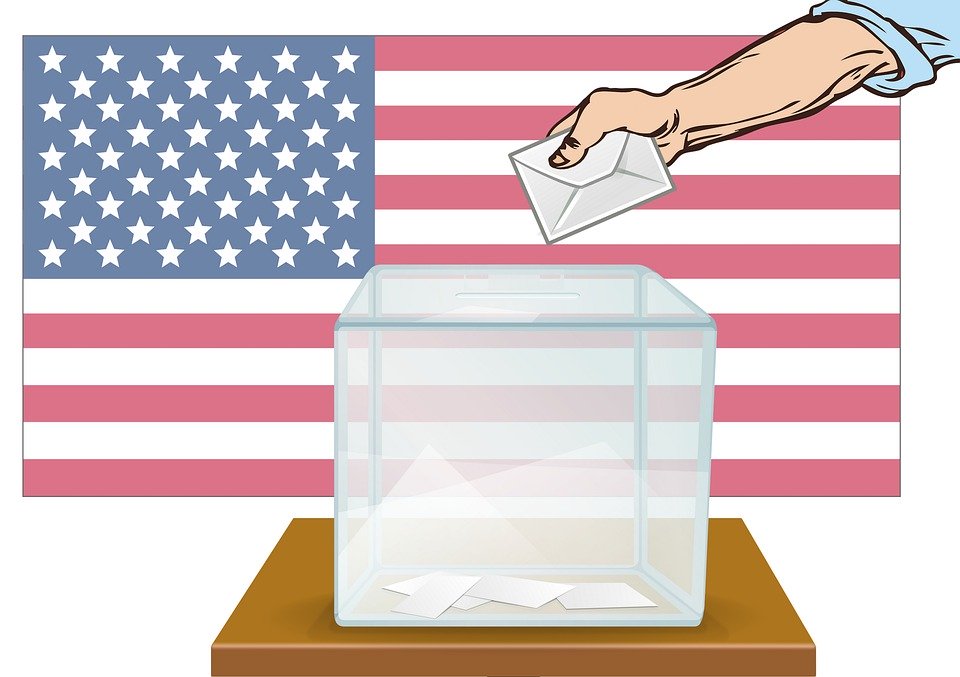 The inauguration will not take place until 20 January 2021, but markets will react not only to the result itself, but prior to this also the expected result with increasing interest being taken in the polls.  Historically the incumbent president usually returns to power, with three quarters of sitting presidents being re-elected since 1932, but Democratic candidate Biden is currently ahead in the polls. Interestingly, Hillary Clinton was also ahead at a similar stage in 2016.

We hope that you and your family are keeping safe and well in the challenging environment we are all experiencing.

The Michael Ambrose Group has had to adapt the way we operate but we are confident that we can maintain our high standards of service to you. We appreciate this exceptional period also means that you might want to communicate more frequently with us about your investments so please do get in touch with your usual adviser if you wish to discuss matters.  Our office phone line remains open and we can be reached in the normal way.