The investment funds we use in constructing client portfolios have faced challenging conditions since the last newsletter was sent.  2022 has seen the worst start to a year for American markets since the 1930’s (which was of course the period of the Great Depression and the lead up to World War II).  US investors tracking the market would have seen an almost 18% loss in the first 4½ months of the year.

Falls are not limited to the US markets, and French investors have fared even worse, seeing more than 21% wiped off their leading index, and China has seen drops of over 15%.  Large falls have been seen in most other markets, although UK investors have been better placed than many for reasons outlined later in this newsletter.

As always there are many contributors to market conditions, but the main factor behind recent falls has been inflation.  Despite relatively benign rates at that time, both our May 2021 and November 2021 newsletters drew attention to the inflationary pressures we felt were building in the economy.  This was being caused by rising oil prices and food prices and the imbalance between supply and demand in the wider market.

The demands for goods and services rose strongly in 2021 as those who had been involuntary savers during the pandemic were finally able to return to a degree of normality in their lives.  This has continued into 2022, with a substantial amount of those savings having now been used.

This increased demand has coincided with a continuing reduction in the availability of supply of many products as a result of lower production during the pandemic and logistical problems of delivery.  The ‘zero covid’ policy in China this year has meant a substantial part of the world’s production capacity has been closed for weeks at a time, compounding the supply issue.

All of the above has of course been greatly exacerbated by the Russian invasion of Ukraine.  This is clearly dreadful from a humanitarian perspective, and our sympathies obviously go to the innocent Ukrainians caught up in this.  From an economic perspective, the desire by Western countries to replace Russian oil with supplies from elsewhere and the retaliatory reduction in supply of gas and electricity by Russia has compounded the problems of rising prices.

Food supplies are being further impacted by the blockading of Ukrainian ports and the cessation of buying Russian products by the West.  These two countries account for large parts of the world’s production of some foods, and a shortage is now being seen.

The impact in the UK has been significant for many, but those in the developing world have been worse affected.  Sri Lanka’s current state of emergency is in large part down to the rising cost of food, where prices are around 30% higher than a year ago.  The bigger the proportion of a family’s outgoings that is spent on food, the greater problem this is.

Inflation figures released on 18 May show that the Consumer Prices Index has recorded a 9.0% increase over the past twelve months, a 40 year high.  The previous measure of the Retail Prices Index, which includes mortgage interest payments, has risen to 11.1%.

Central banks are of course tasked with keeping inflation under control, and in the case of the UK at 2% per annum.  The only tool available to them is to raise interest rates, which has the effect of strengthening currency (and therefore reducing the cost of imports) and taking money out of consumers’ pockets, i.e. as they spend more on servicing debt they have less to spend on goods and services which reduces demand and should lead to falling prices.

So far the Bank of England has raised rates four times in the last six months, and it is generally expected that they could rise four more times in the second half of this year.

Rising inflation means that people are less willing to lend money to governments or companies at the previous low rates (though vehicles known as ‘bonds’), and as a result borrowing costs have also increased.  Our May 2021 newsletter commented that the ten year borrowing rate for the UK government had risen to 0.9% per annum from the 0.25% applying at the beginning of 2021.  Since that time we have seen the borrowing cost rise to 1.9%. 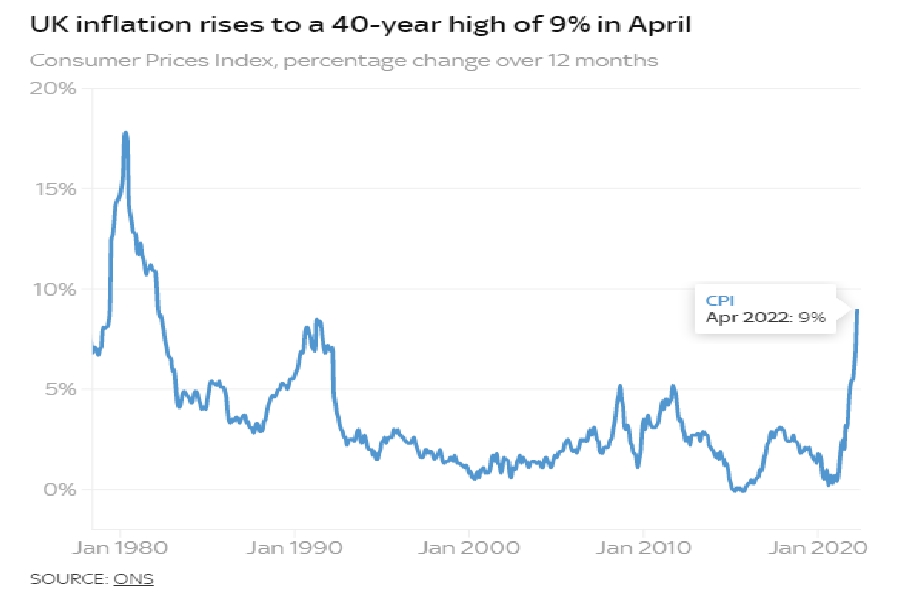 Given the massive level of borrowing in place this increase will prove expensive for the government, but is also damaging for investors in fixed interest stocks.  The longer the loan the greater the impact of inflation and rising rates, and as an example the table below shows the capital impact on three loans to the UK government:

We mentioned earlier that UK investors have fared better than many overseas markets.  This has resulted from two major factors.

Firstly the UK has historically been home to some very large oil and commodity companies. Shell is the largest constituent of the FTSE 100 index making up 8.1% of the overall total, and BP accounts for a further 3.7%.  From a commodity perspective, Rio Tinto and Glencore make up a further 6.2% between them.  These companies have been substantial beneficiaries of price rises in their markets without a corresponding increase in their costs.

Secondly, many large UK companies derive the majority of their earnings from overseas.  This is mainly true of companies in the FTSE 100 index where around 70% of earnings come from abroad.  Because the UK has raised rates more slowly than the US, sterling has weakened relative to the US dollar which has boosted the value of American earnings for UK investors.

However whilst the FTSE 100 has outperformed most major markets, medium and smaller sized companies have fallen heavily, with losses averaging 16% at the point of writing.

THE IMPORTANCE OF BALANCE

In times of such uncertainty we believe that having an appropriately balanced portfolio and access to cash is more important than ever.  It is impossible to predict with certainty the short term movements of any part of the market, and it is for this reason we build diversification into portfolios.  Our clients’ portfolios have generally withstood falls far better than wider markets, and we continue to monitor our core holdings to ensure they remain positioned and are performing as expected.

Over the longer term we expect all of the funds we use to provide competitive returns, and in the short to medium term we continue to ensure that clients have sufficient lower risk holdings to meet any needs that may reasonably be expected to arise.